Part 1: An introduction to Kochi (English)

August 02, 2020
Get on your bicycle and ride. Go wherever your heart contents. Enjoy the lush beauty that surrounds you. And the fruits of your labour will be rewarded.
I love Kochi Prefecture will all my heart, and one of my favourite ways to explore the prefecture was to just get on my Mamachari and ride. With an early start, and an obscure destination in mind, we will see where the day took us. Rural Japan is perfect as you can ride for about 10 minutes from your apartment, and already you are seeing acres of rice fields, the serene mountainous views in the shadows of the background, a plethora of temples and shrines or crystal clear water. And I was lucky to see it all with the journeys I took.
A destination that stood out to me was visiting Hidaka Village (日高村), just west to where I live, and only 90 minutes on the bicycle, so relatively close. What drew me to visiting Hidaka was their “Omurice Road”, but what drew me back was the tea farm. As I arrived at the Roadside Station (道の駅, Michi no Eki), a place that houses a cafe, fresh vegetables brought there directly by the farmers, and a tourist information spot, I saw on the map a tea farm nearby, although what seemed close, ended up being a slow walk up to the top of the mountain, where the Kiriyama Tea Farm was located.
The fruits of your labour will be rewarded. I was greeted by the most gorgeous acre of land I have ever seen. Period. And nearby was a house, where the business office was held. They were surprised I came up by bicycle. They said to me, “どうして自転車で来たにゃ？”, which means, “Why did you come by bicycle”. At the time when I first came to Japan, my Japanese confidence was a bit shaky to say the least, but the first thing that came to my head was “時間があります”, which means “I have time”. They invited me inside, where they served me some of the tea they were growing, and we enjoyed each other’s company. It was a moment in time to take it all in and feel at peace. I kept in contact with the owners of the farm and went back on 5 separate occasions. On the last time I came, they asked if I would like to ride on the back of the truck, and ride through the tea farm, and I was so happy. Especially because it was during Cherry Blossom season.


Every time they would show the same kindness to me. And every time is an important reminder of what I can do to support my community and show that same kindness that was shown to me. I never quite knew what the Japanese concept of お持て成し(Omotenashi) meant, and I always felt guilty when it was given to me. Why do you care so much about me? What have I done to perform something without an expectation of anything in return? And slowly it became just the way of life while living in Japan, especially Kochi, where its much more profound. And that guilt slowly turned into appreciation to the beautiful gesture being presented towards me, and mindset to provide that same お持て成し to the people around me. This was one of countless bicycle rides around Kochi. I remembered one day I wanted to visit an abandoned retirement home, which involved going into the woods, and over a closed off bridge. There were countless occasions where I went to mysterious caves, isolated beaches, temple and shrines, or even just going to the town over and seeing what the vibe is. I am so grateful that I could see so much, and have the most wonderful, interesting, and straight out bizarre encounters along the way.
My bicycle became my main mode of transportation to get around, and I used it pretty much every day. Either to go to our Sunday Market to get my groceries for the week and talk to the shop-keeps, or the Fish Market where we can buy some of the most fresh fish and watch the auctions, my schools, the beautiful 仁淀川 (Niyodo River) and everywhere in between. Its a very simple and peaceful life.

Our city was known for two major festival events, and I would be remiss if I didn't mentioned them. Yosakoi (よさこい) occurs at the start of August every year, which I wrote about here when I participated in 2018.
As well as my favourite day of the year, which is the Kochi Ryoma Marathon(高知龍馬マラソン), which I wrote about it when I ran the marathon in 2019 and 2020. Sakamoto Ryoma (坂本龍馬) is a Samurai, and he brings that spirit to everyone while running the marathon.
A very important man for our prefecture, and perhaps the most well known person to come out of Kochi. Sakamoto Ryoma (1836-1867) was a prominent Japanese figure in the construction of modern Japan. As a prime leader in the movement to overthrow the Tokugawa shogunate (1603-1867) and bringing about the Meiji Restoration (1868-1912). Ryōma under the alias Saitani Umetarō (才谷梅太郎) worked against the Bakufu, the government of the Tokugawa shogunate, and was often hunted by their supporters and the Shinsengumi. Ryōma advocated for democracy, Japanese nationalism, return of power to the Imperial Court, abolition of feudalism, and moderate modernization and industrialization of Japan. In an incredible turn of events, my apartment was about 5 minutes away from where Sakamoto Ryoma grew up, which is memorialised at the Ryoma's Birthplace Memorial Museum in Kamimachi, and near the great man's actual birthplace, which is celebrated with a large stone plaque outside Kamimachi Hospital.
Life in Kochi City is a very peaceful life, where there is delicious food, a lively market, friendly people and an easy-going vibe. Not many tourists come to visit the prefecture due to the limited transportation options, and it has a very unique charm towards it. Only a stones away from Kochi Castle (高知城, Kōchijō), our nightlife area (Obiyamachi, Harimayabashi, Hirome Ichiba), a beautiful Botanical Garden, and a plethora of other sites . The saying 高知家 (Kochi Family) is thrown a lot around the prefecture, and can be seen everywhere. Its an emblem of the the prefecture where everyone looks after one another like they are their own family. An area of Japan removed from the glitz and glamour and high risers you might find from the larger cities, and a peaceful lifestyle is found with an abundance of nature, warm-hearted people, and a simpler time.
I hope you enjoyed this introduction and taste of what it was like to live in Rural Japan. Please look forward to further entries discussing communities and the people along the way, festivals and travel, my BJJ experience in Rural Japan, my employment, family and friends, amongst others.
Gratitude. I am so grateful that I was given the opportunity to live in Kochi City, Japan.
Here are some additional photos and video's from my collection of 10,000 for your viewing pleasure 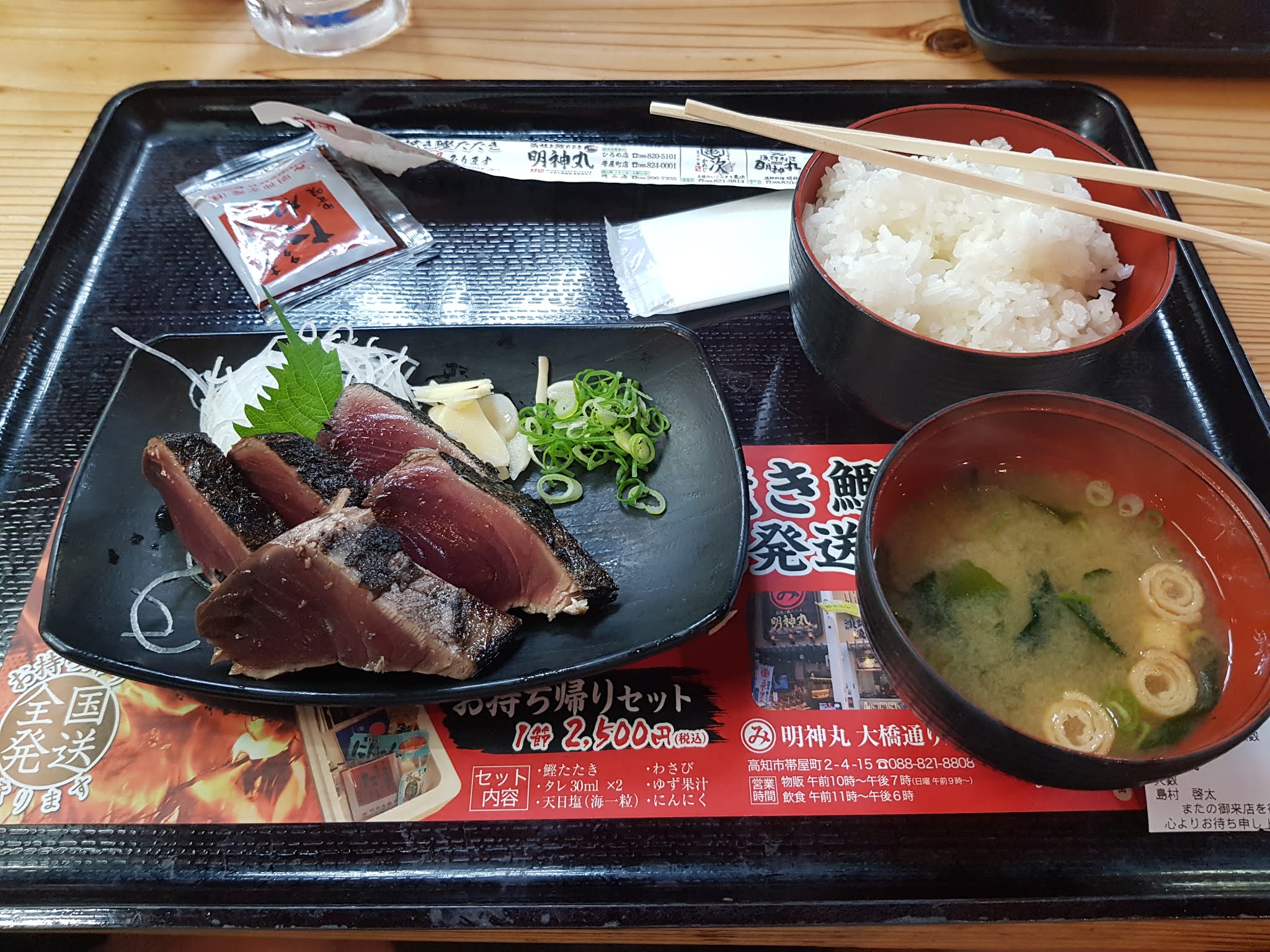 The traditional dish of Kochi, Katsuo no Tataki A view of the Niyodogawa amidst Cherry Blossom 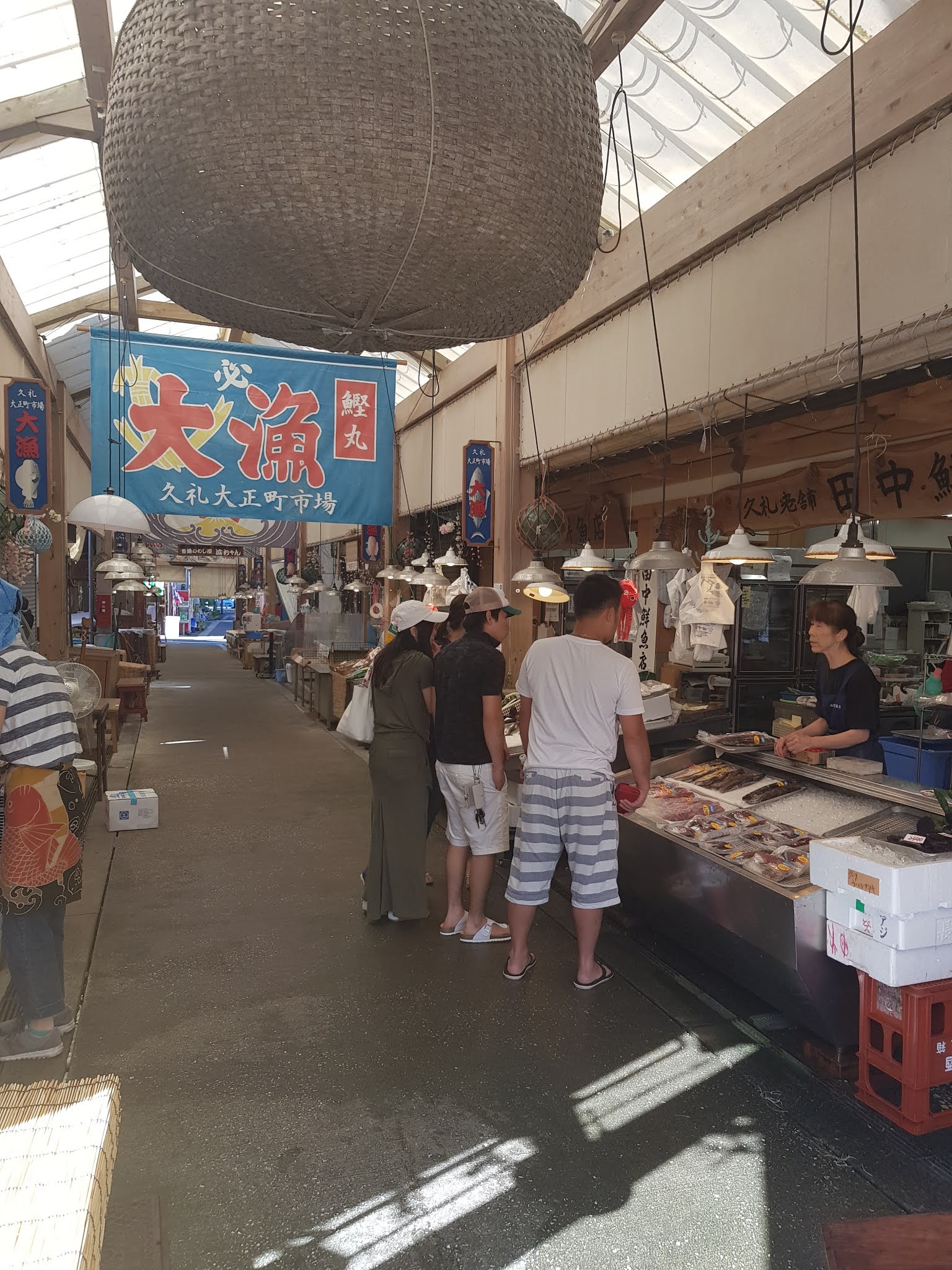 A Shikoku Henro looking to complete the 88 temples 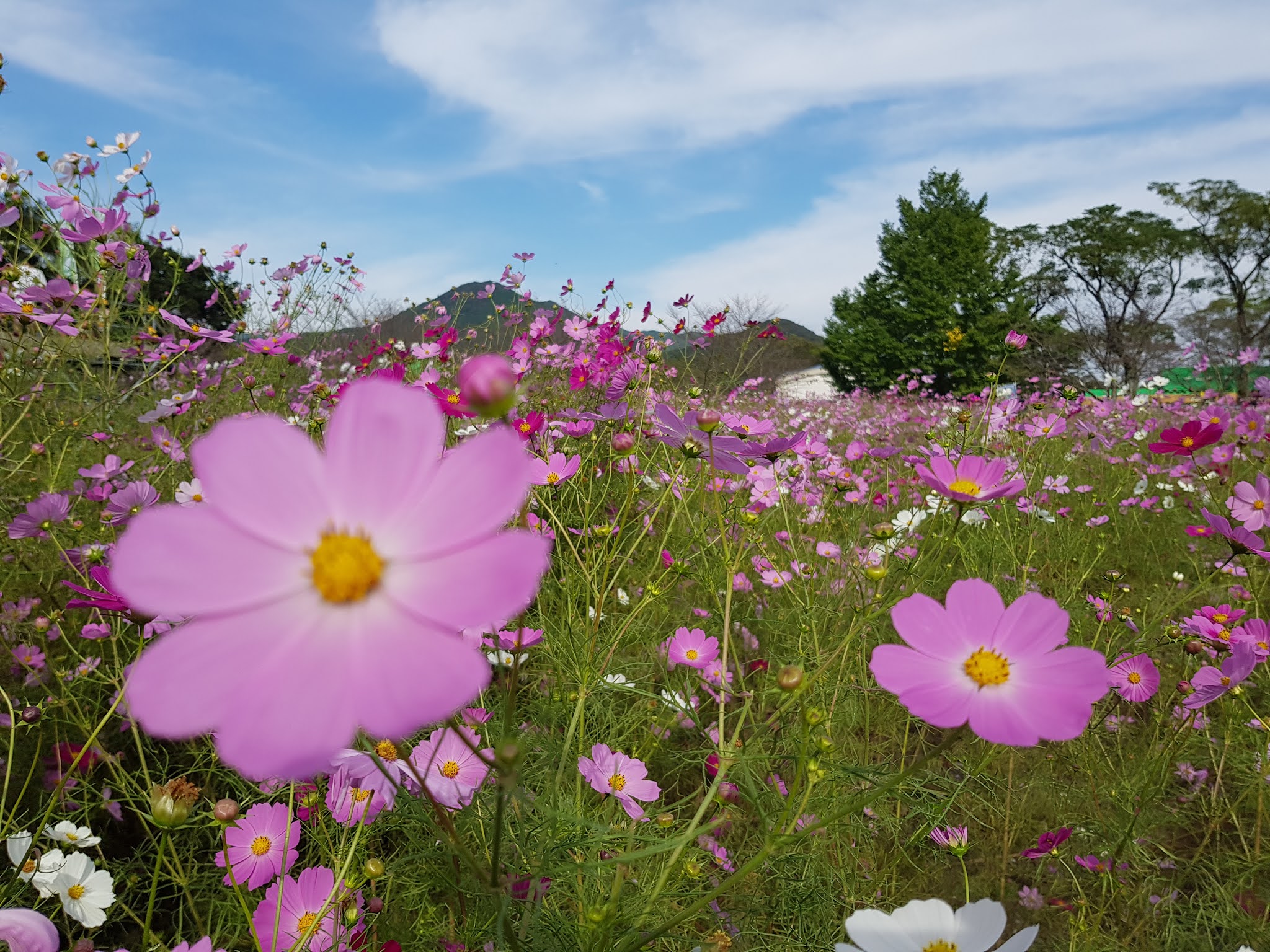 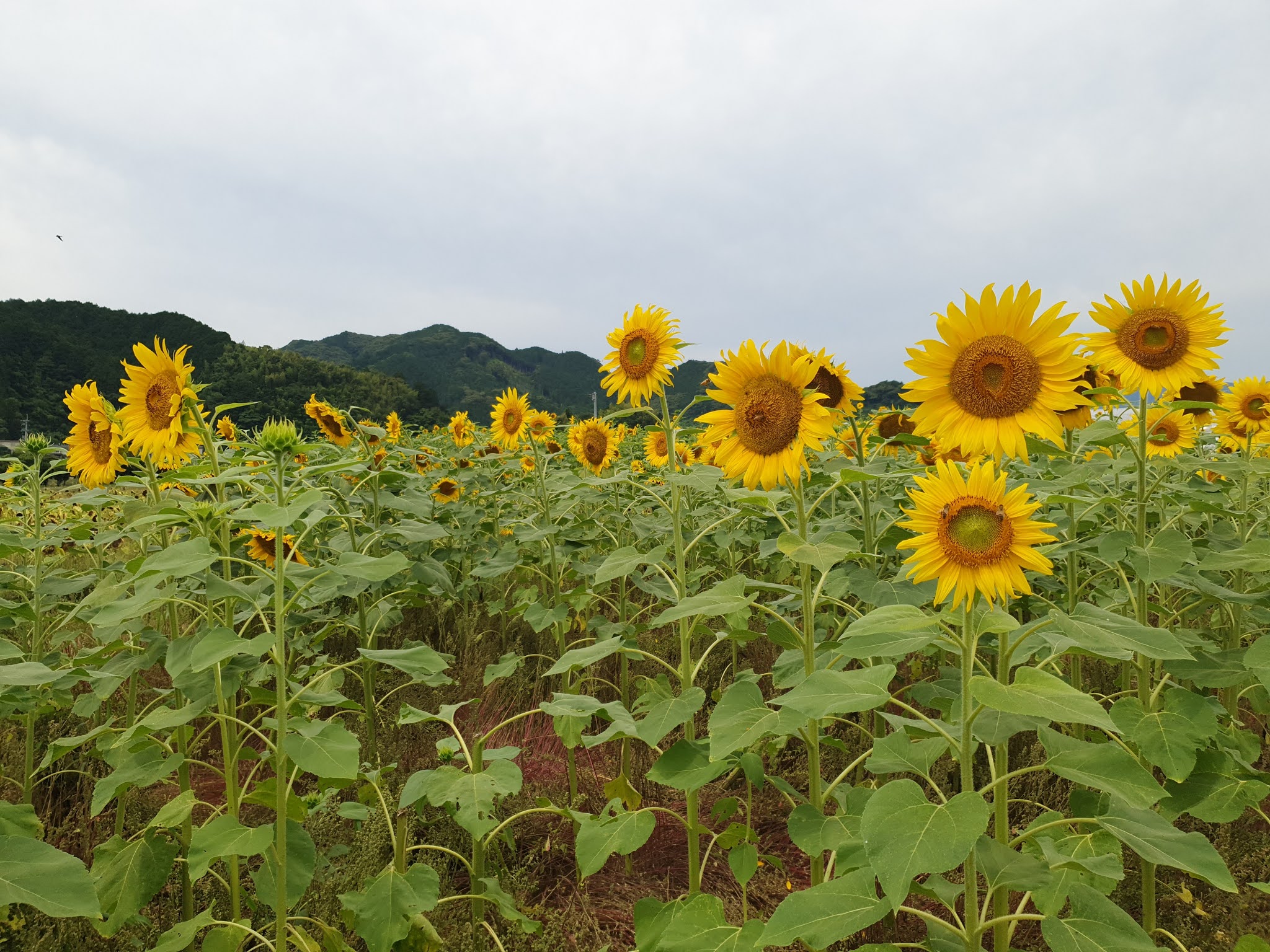 A beautiful Himawari Festival in Tosa City
Riding the truck through the Kiriyama Tea Farm
When the former Emperor and Empress of Japan visits, 2 minutes from your apartment